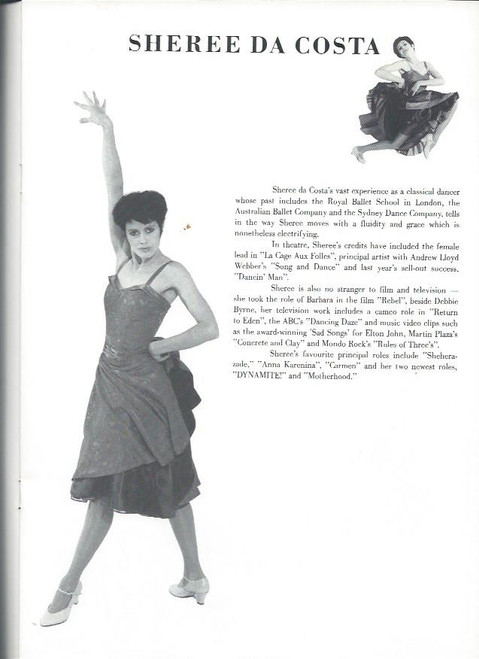 full of Great Pictures of the Show and Cast

He was recognised in the 2003 Queen’s Birthday Honours with a Medal of the Order of Australia (OAM) for services to the entertainment industry and is Australia’s most awarded producer, choreographer and director, and CEO of David Atkins Enterprises, a major-events production company. David Atkins' first big musical theatre shows with the Electric Legs dancers, was a huge success throughout Australia. Kelley featured in both Dancin' Man in 1989, and Dynamite! in 1990.

Atkins created and performed in one of the first successful Australian musicals, Hot Shoe Shuffle, in 1993. The production later transferred to London's Queen's Theatre. Atkins was artistic director on Hey Hey It's Saturday and for the Bicentennial Military Tattoo. Atkins and Ignatius Jones were also co-writers and co-directors of the Musical theatre production The Man from Snowy River: Arena Spectacular. Atkins has starred in, produced, directed, choreographed and created more than 20 musicals in Australia, Britain, the United States, Canada, Malaysia, Singapore and Hong Kong.

Joseph and the Amazing Technicolor Dreamcoat - 4