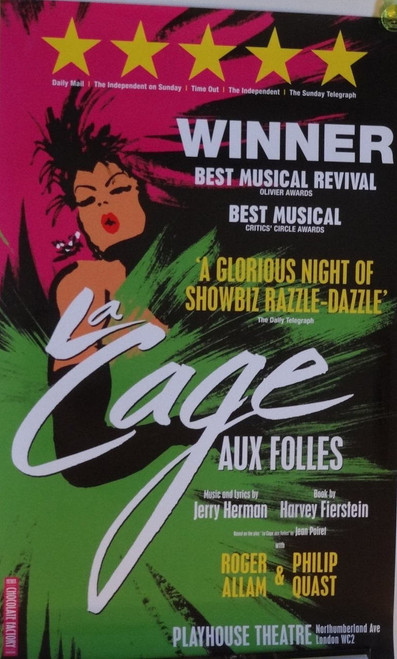 La Cage aux Folles is a musical with a book by Harvey Fierstein and lyrics and music by Jerry Herman. Based on the 1973 French play of the same name by Jean Poiret, it focuses on a gay couple: Georges, the manager of a Saint-Tropez nightclub featuring drag entertainment, and Albin, his romantic partner and star attraction, and the farcical adventures that ensue when Georges's son, Jean-Michel, brings home his fiancée's ultra-conservative parents to meet them. La cage aux folles literally means "the cage of mad women"

A scaled-down London revival, starring Philip Quast and Douglas Hodge opened at the Menier Chocolate Factory on January 8, 2008, and played there until March 8, 2008.The cast also included Neil McDermott, Iain Mitchell and Una Stubbs, with direction by Terry Johnson and choreography by Lynne Page. The production had originally been scheduled to open in December 2007, but it was delayed twice due to illness within the cast. The show opened to mostly positive press with particular praise for Hodge's performance as Albin.
The Menier Chocolate Factory production transferred to the West End on October 20, 2008 at the Playhouse Theatre co-produced with Sonia Friedman Productions, Robert G. Bartner, David Ian Productions, The Ambassador Theatre Group, Matthew Mitchell and Jamie Hendry Productions. It was initially advertised as a "Strictly Limited 12 Week Season"'