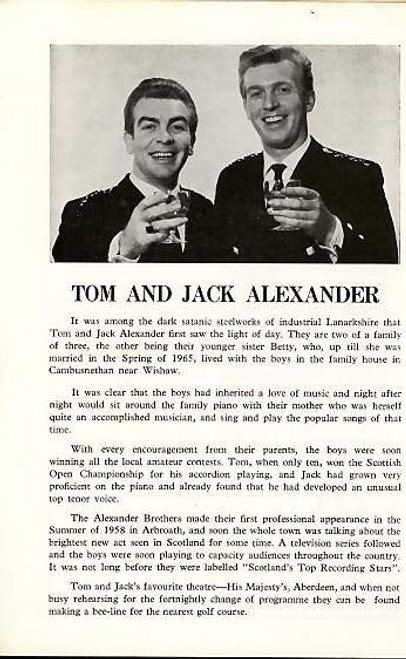 The Alexander Brothersare an easy-listening folk-music duo from Scotland, who have been performing since the 1950s. Their biggest hit single was “Nobody’s Child” in 1964. It sold more copies in Scotland that year than did recordings by The Beatles.Their other hits include “These Are My Mountains”, “The Northern Lights of Old Aberdeen”, “Bonnie Wee Jeannie McColl”, and “Two Highland Lads”. Their 1966 album, These Are My Mountains, peaked at #29 in the UK Albums Chart.  They have toured Canada, the United States, Australia and New Zealand. They appeared at the Sydney Opera House with Jimmy Shand as a guest, and have also played in Carnegie Hall in New York.

This Small Souvenir Program is from the 1973 Alexander Brothers Show Aberdeen at His Majesty's Theatre Aberdeen.

Size 125 x 190 mm 10 pages Great information on the show and cast with some pictures, a great addition to any show collection.

Condition: Used Good 8/10 (the year is written in pen on cover)

The Black and White Minstrel Show - 2