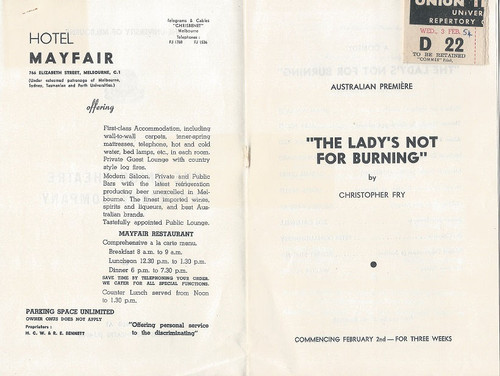 The Lady's Not For Burning By Christopher Fry - 1954

The Lady's Not for Burning is a 1948 play by Christopher Fry. A romantic comedy in three acts, in verse, it is set in the Middle Ages ("1400, either more or less exactly"). It reflects the world's "exhaustion and despair" following World War II, with a war-weary soldier who wants to die, and an accused witch who wants to live. In form, it resembles Shakespeare's pastoral comedies.
It was performed at an Arts Theatre private club for two weeks in London in 1949 starring Alec Clunes, who had also commissioned it. Later that year John Gielgud took the play on a provincial tour followed by a successful London run at the Globe (now Gielgud) Theatre. Gielgud took the play to the United States, where it opened at the Royale Theater on 8 November 1950, with Pamela Brown as the female lead. Richard Burton and Claire Bloom had parts in the cast. It was revived on Broadway in 1983.  In the United Kingdom, a reading was produced at the National Theatre in 2006 and it was fully revived in a production at the Finborough Theatre, London, in 2007.