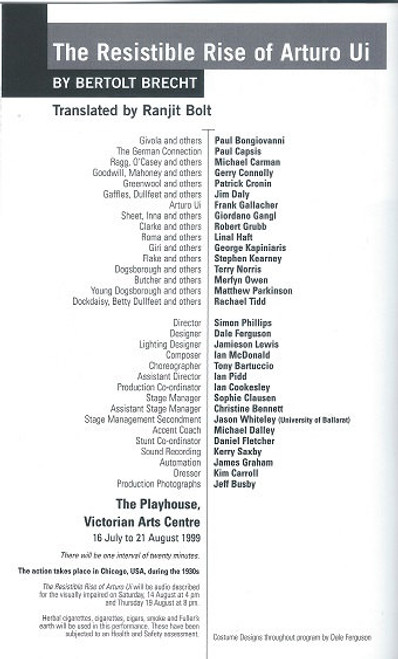 The Resistible Rise of Arturo Ui (German: Der aufhaltsame Aufstieg des Arturo Ui), subtitled "A parable play", is a 1941 play by the German playwright Bertolt Brecht. It chronicles the rise of Arturo Ui, a fictional 1930s Chicago mobster, and his attempts to control the cauliflower racket by ruthlessly disposing of the opposition. The play is a satirical allegory of the rise of Adolf Hitler and the Nazi Party in Germany prior to World War II.

Bertolt Brecht, Fearing persecution and blacklisted from publication and production, Brecht – who in his poetry referred to Adolf Hitler as der Anstreicher ("the housepainter")[2] – left Germany in February 1933, shortly after the appointment of Hitler as Chancellor by President Paul von Hindenburg on the instigation of former Chancellor Franz von Papen. After moving around – Prague, Zürich, Paris – Brecht ended up in Denmark for six years. While there, c. 1934, he worked on the antecedent to The Resistible Rise of Arturo Ui, a satire on Hitler called Ui, written in the style of a Renaissance historian. The result was a story about "Giacomo Ui", a machine politician in Padua, a work which Brecht never completed. It was later published with his collected short stories.