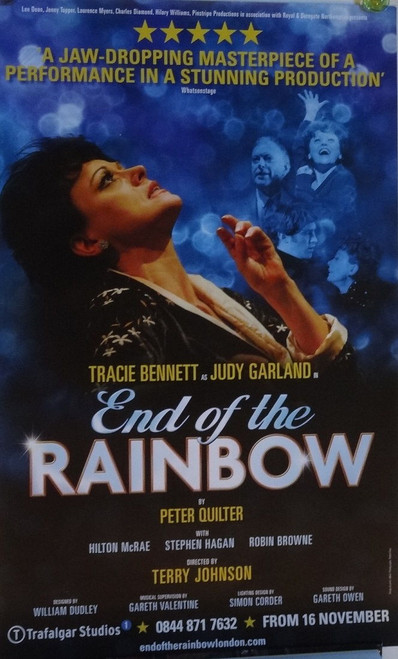 End of the Rainbow is a musical drama by Peter Quilter, which focuses on Judy Garland in the months leading up to her death in 1969. After a Sydney premiere in 2005, the show has played on the West End in London and a Broadway production opened in 2012.

It was then performed from February 5–20, 2010 at Northampton's Royal & Derngate Theatre. This production was directed by Terry Johnson and starred Tracie Bennett as Judy Garland, with Hilton McRae as Anthony and Stephen Hagan as Mickey Deans. End of the Rainbow ran in the West End from 16 November 2010 to 21 May 2011 at Trafalgar Studios, starring Tracie Bennett. The West End production received nominations for four Olivier Awards, including Best Actress for Bennett, Best Actor in a Supporting Role for McRae and Best New Play. The show then toured in the UK from 25 August and ending in December 2011 at Richmond Theatre.

Looking for End of the Rainbow Souvenir Program See It HERE