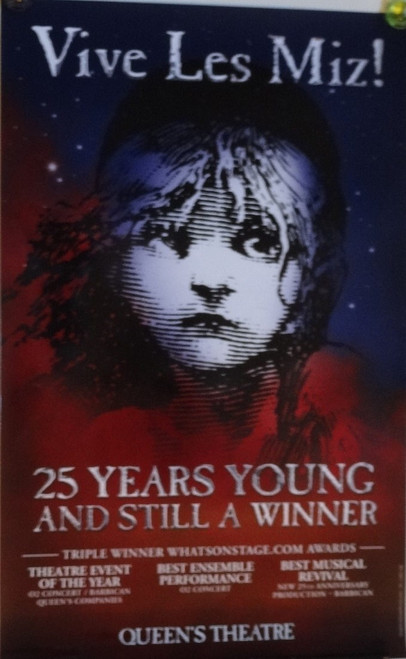 Les Misérables, is a sung-through musical based on the 1862 novel of the same name by French poet and novelist Victor Hugo. The musical premiered in Paris in 1980, and has music by Claude-Michel Schönberg and original French-language lyrics by Alain Boublil and Jean-Marc Natel. An English-language libretto and English lyrics were written by Herbert Kretzmer. The London production has run continuously since October 1985, making it the longest-running musical in the West End and the second longest-running musical in the world after the original Off-Broadway run of The Fantasticks.

The first production in English, produced by Cameron Mackintosh and adapted and directed by Trevor Nunn and John Caird, opened on 8 October 1985 (five years after the original production) at the Barbican Arts Centre, London. It was billed in the RSC Barbican Theatre programme as "The Royal Shakespeare Company presentation of the RSC/Cameron Mackintosh production", and played to preview performances beginning on 28 September 1985.