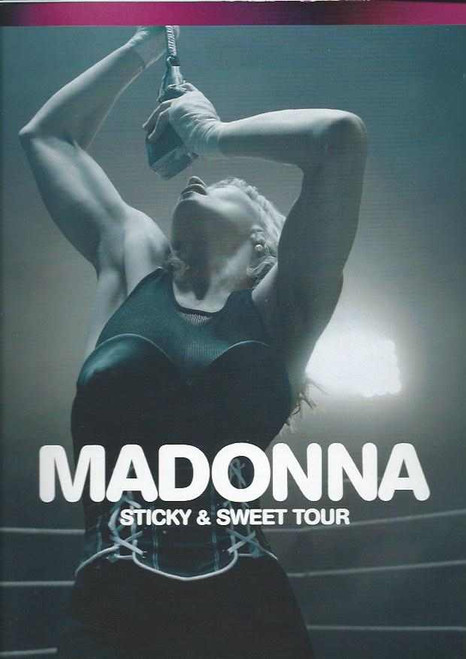 Sticky & Sweet Tour was the eighth concert tour by American singer Madonna to promote her eleventh studio album, Hard Candy. It began in August 2008 and was Madonna's first tour from her new recording and business deal with Live Nation. The tour was announced in February 2008, with dates for American and British venues revealed. Though initially planned, the tour did not visit Australia due to financial problems and the financial recession. Costume designer Arianne Phillips designed the costumes, supported by a number of famous designers and brands. The stage for the main show was planned similarly to that of her previous 2006 Confessions Tour. After the tour concluded in 2008, Madonna announced plans of playing a second European leg in 2009 to play in territories she either had never been to or had not played for a long time.

The tour was described as a "rock driven dancetastic journey". It was divided into four acts: Pimp, where S&M was the main theme, Old School where Madonna's classic songs were performed, while displaying work of deceased artist Keith Haring, Gypsy, a fusion of Romani folk music and dance, with the performances ranging from melancholy to joyous, and Rave, where she performed eastern influences. The show ended with sing-along of the final song with the audience. Some changes were made to the set list during the second European leg of the tour in 2009, including a dance tribute to deceased singer Michael Jackson.

The tour ranked third in Billboard's "Top 25 Tours", with a gross of over U.S. $162 million (by mid-November 2008). Pollstar ranked the tour the leading North American grosser for 2008 at $105.3 million. On December 2008, Live Nation announced that the U.S. leg of the tour sold 550,000 tickets and grossed $91.5 million. Together with the European and Mexican dates, the tour grossed a total of $282 million, making it the highest grossing tour of 2008. It also became the biggest selling tour by a solo artist, breaking the record previously held by her own Confessions Tour in 2006.

Size 240 x 340 mm
The program is loaded with photos of Madonna, It's printed on very thick glossy paper and has 60 pages a beautiful collectors piece, something very special.
Condition Used Good 8/10 cover shows light signs of handling/wear, but internal pages are in excellent condition.
(Please Note scans are low res for fast loading)