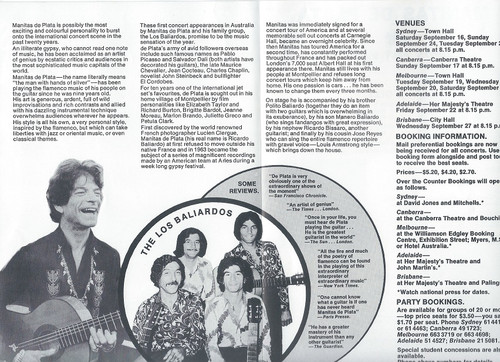 Manitas De Plata - The Man with Hands if Silver

Manitas de Plata (born Ricardo Baliardo; 7 August 1921 – 5 November 2014) was a flamenco guitarist born in Southern France. Despite achieving worldwide fame, he was criticized for not following certain rhythmic rules (compás) that are traditional in flamenco.

Ricardo Baliardo was born in a gypsy caravan in Sète in southern France. He became famous by playing each year at the Saintes-Maries-de-la-Mer gypsy pilgrimage in Camargue, where he was recorded live by Deben Bhattacharya. He toured the world from 1967, and recorded discs. He played with the dancer Nina Corti. In 1968 he played at the Royal Variety Performance in London.
Manitas de Plata was the father of Jacques, Maurice, and Tonino Baliardo and uncle to Paul, François (Canut), Patchaï, Nicolas and André Reyes (the sons of his cousin, flamenco artist José Reyes (1928-1979), all members of the Catalan Rumba band Gipsy Kings. Australian multi-instrumentalist Chris Freeman, his student in 1971, acknowledged de Plata's influence and teachings.

Frankie and Johnny in the Clair de Lune