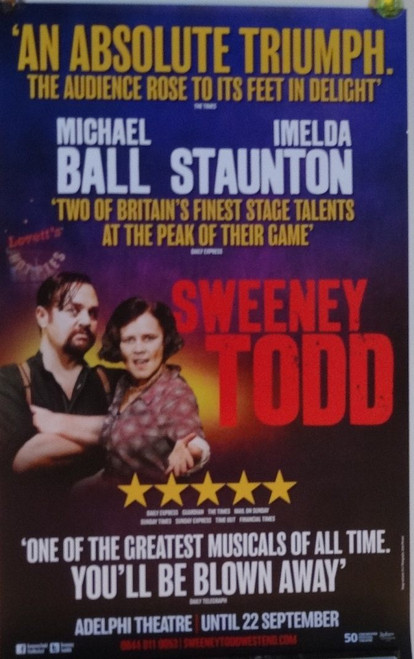 music and lyrics by Stephen Sondheim and book by Hugh Wheeler

2012 West End revival, Michael Ball and Imelda Staunton starred in a new production of the show that played at The Chichester Festival Theatre, running from September 24 to November 5, 2011. Directed by Jonathan Kent, the cast included Ball as Todd, Staunton as Mrs. Lovett, James McConville as Tobias, John Bowe as Judge Turpin, Robert Burt as Pirelli, Luke Brady as Anthony, Gillian Kirkpatrick as Lucy Barker, Lucy May Barker as Johanna and Peter Polycarpou as Beadle Bamford.

It was notably set in the 1930s instead of 1846 and restored the oft-cut song "Johanna (Mea Culpa)". The production received positive reviews from both critics and audience members and transferred to the Adelphi Theatre in the West End in 2012 for a limited run from March 10 to September 22, 2012.Comedian Jason Manford made his musical debut as Pirelli from July 2 to 28 and August 15, 18 and 24, 2012 while Robert Burt appeared at Glyndebourne Festival Opera.The West End transfer received six Laurence Olivier Award nominations of which it won the three; Best Musical Revival, Best Actor in a Musical for Ball and Best Actress in a Musical for Staunton.