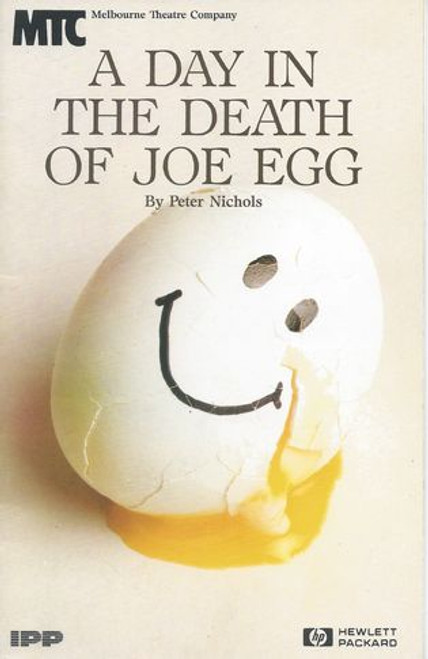 American Airlines Theatre A Day in the Death of Joe Egg is a 1967 play by English playwright Peter Nichols, first staged at the Citizens Theatre in Glasgow, Scotland before transferring to London's West End theatres in 1968.The play centers on a British couple who are struggling to save their marriage whilst trying to raise their only child, a small girl with cerebral palsy. She uses a wheelchair and is unable to communicate. Caring for her has occupied nearly every moment of her parents' lives since her birth, and this has taken a heavy toll on their marriage. Sheila, her mother, gives Josephine as much of a life as she can while Bri wants the child institutionalised and has begun to entertain chilling fantasies of killing himself and Josephine. A Day in the Death of Joe Egg (3 April 2003) Opening Night Eddie Izzard, Victoria Hamilton, Dana Ivey - American Airlines Theatre After its premiere in Glasgow in 1967, A Day in the Death of Joe Egg opened in London's West End in 1967 then transferred to Broadway the next year. On Broadway, the play received four nominations for Tony Awards, including Best Play, Best Actor (Albert Finney), Best Featured Actress (Zena Walker) and Best Director (Michael Blakemore). Walker won the Tony for Best Featured Actress. The play has been revived twice on Broadway. A 1985 revival staged at the Longacre Theatre ran for 93 performances. It was directed by Arvin Brown and the cast included Jim Dale, Stockard Channing, Joanna Gleason, Christina Pickles and Kate Wilkinson. The production won the Drama Desk Award for Outstanding Revival. A 2001 revival on London's West End starred Clive Owen and Victoria Hamilton and was directed by Laurence Boswell. The same production opened on Broadway in 2003 at the American Airlines Theatre and played for 69 performances. It starred Eddie Izzard and Victoria Hamilton. In October 2011 the Citizens Theatre will once again stage the play that premiered there in 1967, with Miriam Margolyes confirmed in the cast.