A Night in November 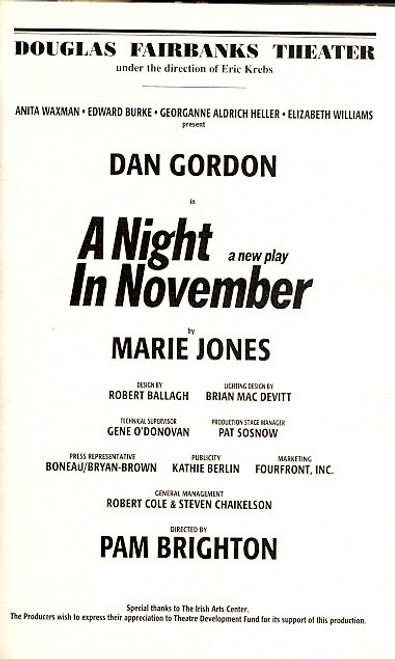 A Night in November

A Night in November is a 1994 monodrama written by Marie Jones about one man's struggle with national identity during The Troubles in Northern Ireland.Marie Jones specialises in feel-good plays, most famously Stones in His Pockets, her witty account of a Hollywood film crew descending on rural Ireland, in which a large variety of characters were impersonated by only two actors. On 8 August 1994 A Night in November was opened by DubbelJoint Productions in The Rock Theatre as part of the West Belfast Festival, starring Dan Gordon, directed by Pam Brighton, with a design by Robert Ballagh. This production toured widely, including a transfer to the Tricycle Theatre, London and to the Douglas Fairbanks Theater in New York City. It won the Theatrical Management Association's award for Best Touring Production in 1995. Dan Gordon then reprised the role for the Lyric Theatre in Belfast in 2002 and toured to the Perth Festival in 2003.