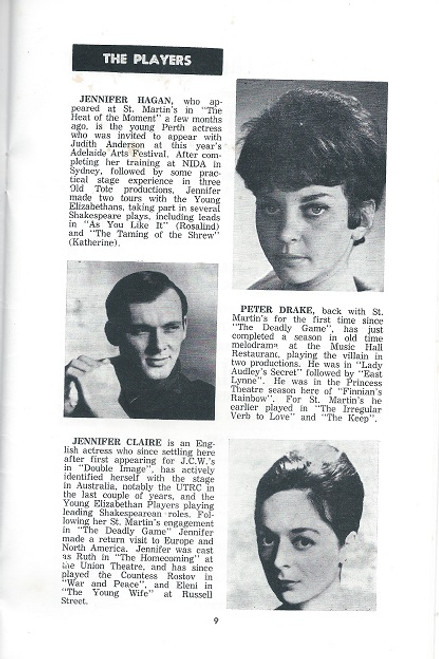 A Phoenix Too Frequent by Christopher Fry

The Collection by Harold Pinter

A Phoenix Too Frequent is a stage play by Christopher Fry.
It has been adapted for television at least 10 times. A possible 11th version may have aired as part of British series ITV Television Playhouse in 1959.

The Collection is a 1961 play by Harold Pinter featuring two couples, James and Stella and Harry and Bill. It is a comedy laced with typically "Pinteresque" ambiguity and "implications of threat and strong feeling produced through colloquial language, apparent triviality, and long pauses"

Passion, Poison, and Petrifaction is a short play by Bernard Shaw, subtitled The Fatal Gazogene: a Brief Tragedy for Barns and Booths. It is a comic mock-melodrama, written to raise funds for charity. It has been revived occasionally, in tandem with other short works by Shaw or by other playwrights.

This Souvenir Program is from the 1966 Australian Production