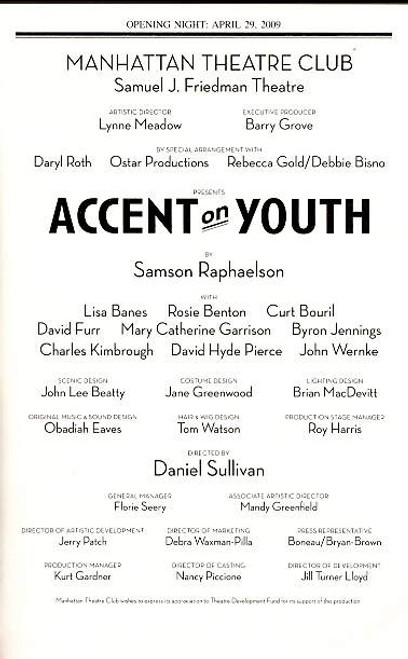 Accent on Youth is a Broadway play written by Samson Raphaelson which debuted on Christmas Day, 1934. The plot concerns a lazy, middle-aged playwright who is spurred to write by his new young secretary. The original cast included Nicholas Hannen as playwright Steven Gaye and Constance Cummings as secretary Linda Brown. The play has been filmed several times. The 1935 movie Accent on Youth starred Herbert Marshall and Sylvia Sydney. The second film version was a musical and titled Mr. Music in 1950, starring Bing Crosby and Nancy Olson. The third film version, titled But Not For Me (1959), starred Clark Gable with Carroll Baker. The Manhattan Theatre Club will stage a limited-engagement revival of the play opening April 7, 2009 in previews, featuring David Hyde Pierce, Charles Kimbrough, and Mary Catherine Garrison, with Daniel J. Sullivan as director.

A Swell Party A Celebration of Cole Porter