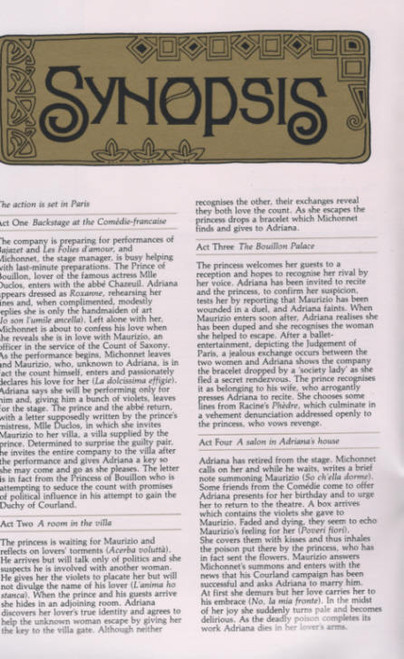 Adriana Lecouvreur is an opera in four acts by Francesco Cilea to an Italian libretto by Arturo Colautti, based on the 1849 play Adrienne Lecouvreur by Eugène Scribe and Ernest Legouvé. It was first performed on 6 November 1902 in Milan. The opera premiered at the Teatro Lirico, Milan, on 6 November 1902, with the well-known verismo soprano Angelica Pandolfini in the title role, Enrico Caruso in the role of Maurizio, and the lyric baritone Giuseppe De Luca as Michonnet.

The opera was first performed in the United States by the San Carlo Opera Company on January 5, 1907 at the French Opera House in New Orleans with Tarquinia Tarquini in the title role. It gained its Metropolitan Opera premiere on 18 November 1907 (in a performance starring Lina Cavalieri and Caruso). It had a run of only three performances that season, however, due in large part to Caruso's ill-health. Subsequently, it was revived at the Met from time until a new production was commissioned in 1963. That 1963 production continued to be remounted at the same theatre, with differing casts, for the next few decades. It was in the lead role of this opera that the Spanish tenor Plácido Domingo made his Met debut in 1968, alongside Renata Tebaldi in the title role. He sang again in Adriana Lecouvreur in February 2009,although his voice was by then in decline.

The title role in Adriana Lecouvreur has always been a favorite of sopranos with large voices, which tend to sit less at the very top of their range. This part has a relatively low tessitura but requires great vocal power, and is a meaty and challenging one to tackle on a dramatic level – especially during the work's so-called "Recitation" and death scene. Famous Adrianas of the past 75 years have included Claudia Muzio, Magda Olivero, Leyla Gencer, Montserrat Caballé, Renata Tebaldi, Raina Kabaivanska, Renata Scotto, Mirella Freni and Joan Sutherland. Angela Gheorghiu tackled the role at the Royal Opera, London in 2010 with Jonas Kaufmann as Maurizio.."