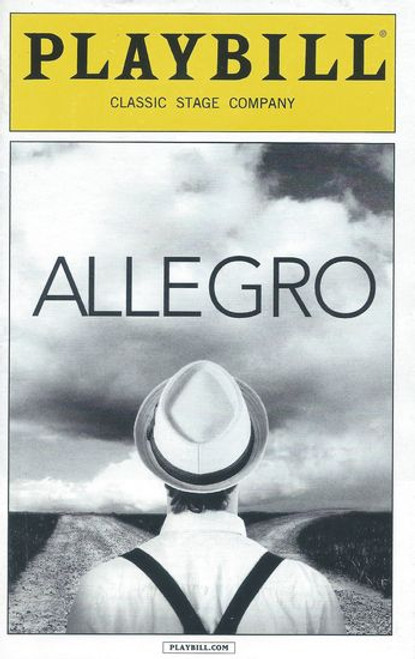 Allegro is a musical by Richard Rodgers (music) and Oscar Hammerstein II (book and lyrics), their third collaboration for the stage. Opening on Broadway on October 10, 1947, the musical centers on the life of Joseph Taylor, Jr., who follows in the footsteps of his father as a doctor, but is tempted by fortune and fame at a big-city hospital.
After the immense successes of the first two Rodgers and Hammerstein musicals, Oklahoma! and Carousel, the pair sought a subject for their next play. Hammerstein had long contemplated a serious work which would deal with the problems of the ordinary man in the fast-moving modern world. He and Rodgers sought to create a work which would be as innovative as their first two stage musicals. To that end, they created a play with a large cast, including a Greek chorus. The production would have no sets; props and projections served to suggest locations.
After a disastrous tryout in New Haven, Connecticut, the musical opened on Broadway to a large advance sale of tickets, and very mixed reviews. Agnes de Mille, the choreographer of Rodgers and Hammerstein's previous Broadway productions, both directed and choreographed the work. The show was viewed as too moralistic, and the Broadway run ended after nine months; it was followed by a short national tour. It had no West End production and has rarely been revived. There are two recordings of Allegro, the original cast album and a studio recording released in 2009.