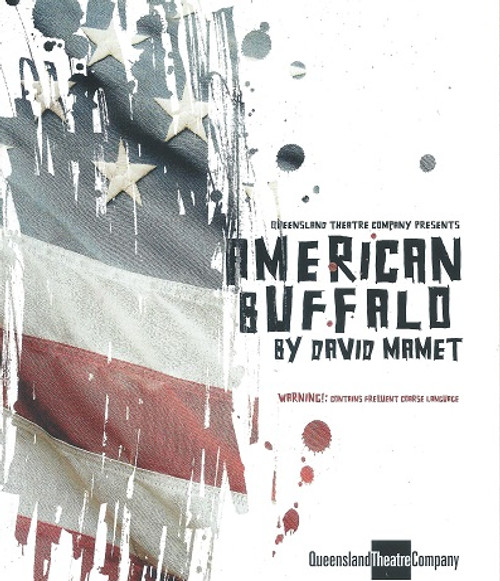 American Buffalo is a 1975 play by American playwright David Mamet which had its premiere in a showcase production at the Goodman Theatre, Chicago. After two more showcase productions it opened on Broadway in 1977
American Buffalo opened at the Goodman Theatre Stage II on November 23, 1975, directed by Gregory Mosher with the cast that featured William H. Macy (Bobby), Bernard Erhard (Teach), and J.J. Johnston (Donny). The play premiered Off-Broadway at the Theatre at St. Clement's Church on January 26, 1976 and closed on February 7, 1976. Directed by Gregory Mosher, the cast featured Mike Kellin (Teach), Michael Egan (Donny) and J. T. Walsh (Bobby).

The play premiered on Broadway at the Ethel Barrymore Theatre on February 8, 1977 in previews, officially on February 16, 1977, and closed on June 11, 1977 after 122 performances. Directed by Ulu Grosbard, the cast featured Robert Duvall (Teach), Kenneth McMillan (Donny), and John Savage (Bobby). Sets were by Santo Loquasto and lighting by Jules Fisher. The play was produced Off-Broadway at the Circle in the Square (Downtown) in June 1981, starring Al Pacino as Teach, Thomas Waites (Bobby) and Clifton James (Donny) and directed by Arvin Brown.

Shut Your Eyes and Think of England