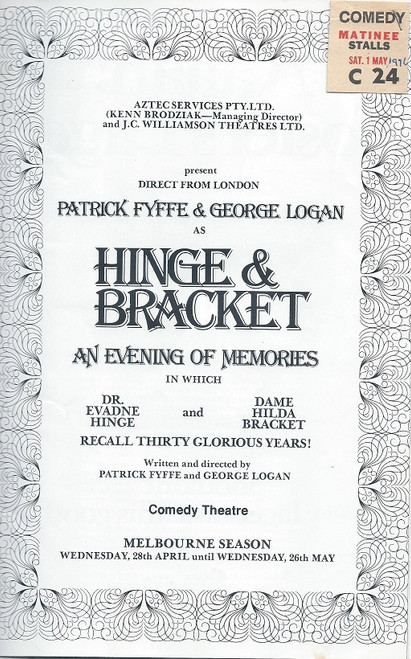 An Evening of Memories with Hingle and Bracket

Dr Evadne Hinge and Dame Hilda Bracket were the stage names of George Logan and Patrick Fyffe respectively. The characters of Hinge (somewhat brittle and acerbic) and Bracket (more flamboyant) were elderly intellectual female musicians; in these personae the male Logan and Fyffe played and sang songs to comic effect. They made many appearances on television and radio. The two generally performed together, but on rare occasions appeared separately. Logan declined to continue the characterisation of Dr Hinge after Fyffe died.
A genteel English inter-war world was recalled via the act. Their work was frequently decorated with double entendres. The ladies shared a house (The Old Manse or Utopia Ltd) in the fictional village of Stackton Tressel in Suffolk, where they employed the services of an eccentric housekeeper, Maud, played in the radio series by English character actress Daphne Heard. Hinge and Bracket spent two years in the 1970s performing in London pubs and clubs. This included the Royal Vauxhall Taverna (a popular gay venue), and the Kensington restaurant AD8, owned by Desmond Morgan and April Ashley.
Hinge and Bracket appeared in 1974 at the Edinburgh Festival. They toured for several years before appearing on the BBC Radio 4 series The Enchanting World of Hinge and Bracket, which ran from 1977 to 1979. Their TV show Dear Ladies was shown on BBC Two from 1983 to 1985. The Random Jottings of Hinge and Bracket ran on BBC Radio 2 from 1982 to 1989 and At Home with Hinge and Bracket ran for a single series in 1990.

This Souvenir Program is from the Comedy Theatre Melbourne 1976

Size 280 x 180 mm  Pictures and information of the cast and show.
Condition: Used Good 8/10 Does have small cracks on cover spine - original ticket stapled to 2nd page
(Please Note scans are low res for fast loading)
Each Order will incur a $5.00 handling fee (including free shipping)
All Prices Shown are in USD (United States of America Dollars)
All Payments by Paypal Just Checkout as GUEST no need to register