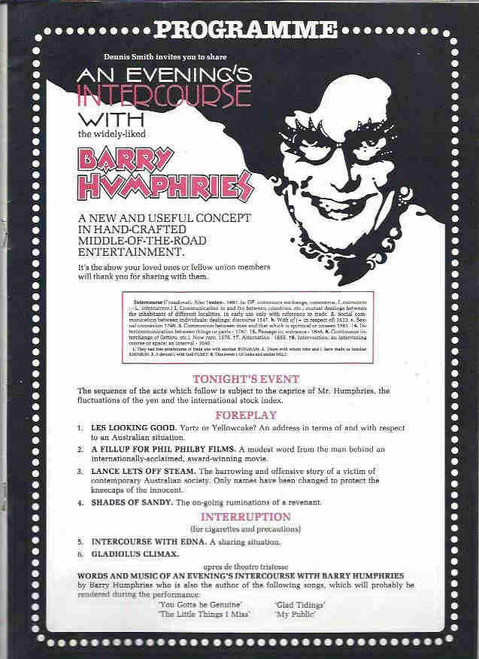 Dame Edna is a character created and performed by Australian dadaist performer and comedian Barry Humphries, famous for her lilac-coloured or "wisteria hue" hair and cat eye glasses or "face furniture," her favourite flower, the gladiolus ("gladdies") and her boisterous greeting: "Hello, Possums!" As Dame Edna, Humphries has written several books including an autobiography, My Gorgeous Life, appeared in several films and hosted several television shows (on which Humphries has also appeared as himself and other alter-egos).

John Barry Humphries, AO, CBE (born 17 February 1934) is an Australian comedian, satirist, artist, and author. Humphries is best known for writing and playing his on-stage and television alter egos Dame Edna Everage and Sir Les Patterson. He is also a film producer and script writer, a star of London's West End musical theatre, an award-winning writer and an accomplished landscape painter. For his delivery of dadaist and absurdist humour to millions, biographer Anne Pender described Humphries in 2010 as not only "the most significant theatrical figure of our time … [but] the most significant comedian to emerge since Charlie Chaplin".