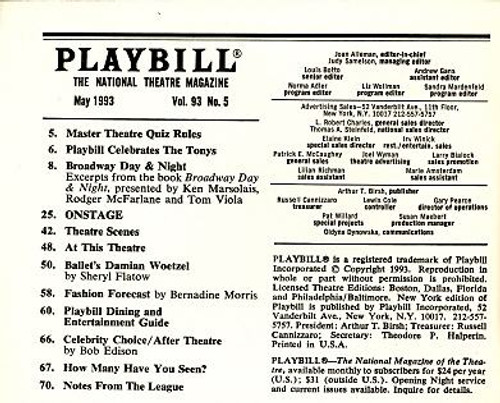 Angels in America: A Gay Fantasia on National Themes is a play in two parts by American playwright Tony Kushner. It has been made into both a television miniseries and an opera by Peter Eötvös. Set in New York City in the mid-1980s, Act One of Millennium Approaches introduces us to the central characters. As the play opens, Louis Ironson, a neurotic, gay Jew learns his lover, Prior Walter, has AIDS. As the play and Prior's illness progress, Louis becomes unable to cope and moves out. Meanwhile, closeted homosexual Mormon and Republican law clerk Joe Pitt is offered a major promotion by his mentor, the McCarthyist lawyer Roy Cohn. Joe doesn't immediately take the job because he feels he has to check with his Valium-addicted, agoraphobic wife, Harper, who is unwilling to move. Roy is himself deeply closeted, and discovers that he has AIDS. Joe does not know of Roy's illness at this time. Run: May 4, 1993 - Dec 4, 1994 Walter Kerr Theatre