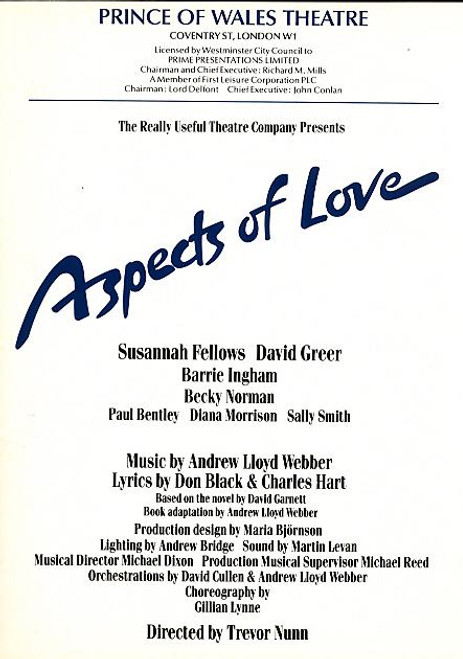 Prince Of Wales Theatre London Aspects of Love is a musical with a book and music by Andrew Lloyd Webber and lyrics by Don Black and Charles Hart. It is famous for the song "Love Changes Everything." The West End production, directed by Trevor Nunn and choreographed by Gillian Lynne. Based on the novella of the same name by David Garnett, the piece focuses on the romantic entanglements of actress Rose Vibert, her admiring fan Alex Dillingham, his underage cousin Jenny, his uncle George, and George's mistress, sculptress Giulietta Trapani, over a period of 17 years. The "aspects" of the title refers to the many forms that love takes in the show: love between couples, both as romantic infatuation and as married people; children and their parents; and there are even some hints of lesbianism (Giulietta and Rose). Lloyd Webber was introduced to Aspects of Love in 1979, when he and Tim Rice were approached to write a few songs for a proposed film version. When nothing came of it, he suggested to Trevor Nunn that they collaborate on a stage adaptation. In 1983, they presented a cabaret of numbers they had written, but it was not until five years later that they tackled the project in earnest. For the finished project, Lloyd Webber used at least five of the tunes he had written for the 1986 one-act musical Cricket, which he had written with Tim Rice. Aspects of Love (1989 London Program) Ann Crumb, Michael Ball, Kevin Colson- Prince Of Wales Theatre UK.