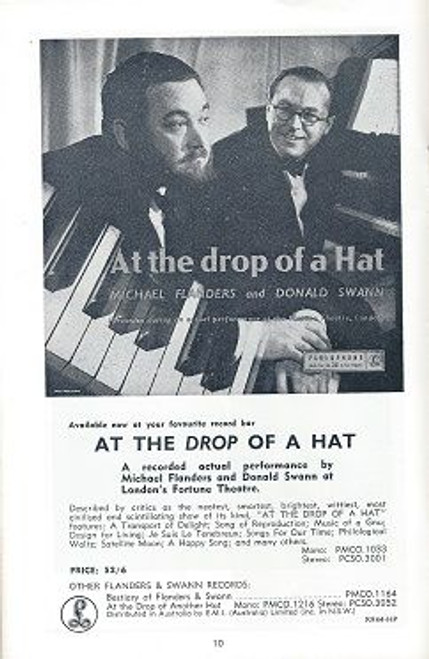 At the Drop of a Hat is a musical revue by Flanders and Swann, described by them as "an after-dinner farrago". In the show, they both sang on a nearly bare stage, accompanied by Swann on the piano. The songs were linked by contemporary social commentary, mostly by Flanders. After a long London run the show played in the US, Switzerland, and on tour in Britain.

The two-man show was performed with Flanders in a wheelchair (as a result of polio contracted in 1943) and Swann at a grand piano on an otherwise empty stage. The only other person to appear on stage was the stage manager, who brought on and handed to Flanders the "little Edwardian hat" he wore for "Madeira, M'Dear?".  The show consisted of a collection of mainly humorous songs, mostly written by them, connected by topical comments. A second revue called At the Drop of Another Hat was produced in 1963 and toured Australia in 1964.

The Motherfucker with the Hat