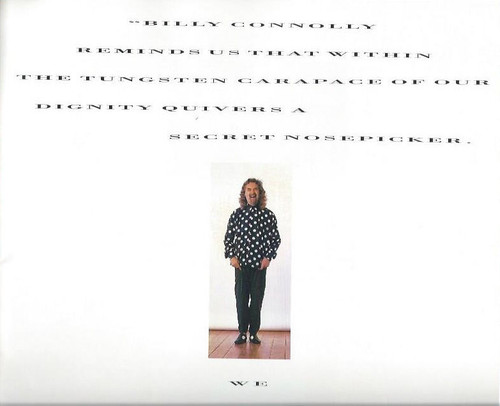 William "Billy" Connolly, CBE (born 24 November 1942) is a Scottish comedian, musician, presenter and actor. He is sometimes known, especially in his native Scotland, by the nickname "The Big Yin" ("The Big One"). His first trade, in the early 1960s, was as a welder (specifically a boilermaker) in the Glasgow shipyards, but he gave it up towards the end of the decade to pursue a career as a folk singer in the Humblebums and subsequently as a soloist. In the early 1970s, he made the transition from folk-singer with a comedic persona to full-fledged comedian.

Although Connolly had performed in North America as early as the 1970s, and had appeared in several movies that played in American theatres, he nonetheless remained relatively unknown until 1990 when he was featured in the HBO special Whoopi Goldberg and Billy Connolly in Performance, produced by New York's Brooklyn Academy of Music. Goldberg introduced Connolly, and his performance has been cited as the moment that officially launched his career in the States. Soon after, Connolly succeeded Howard Hesseman as the star of the sitcom Head of the Class for the 1990–1991 season, but the series was cancelled during his tenure.