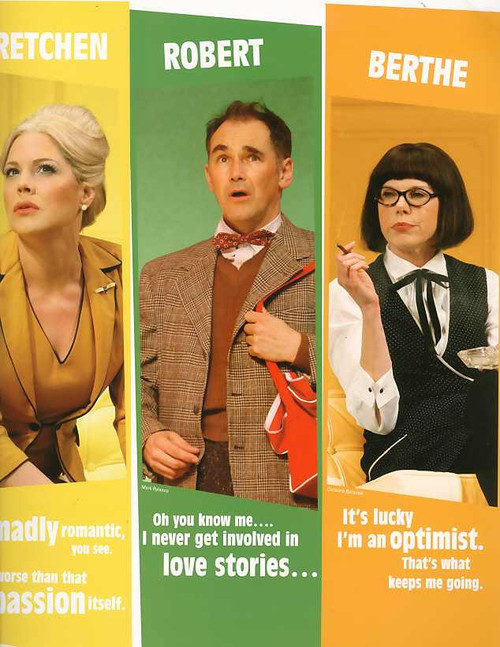 Boeing-Boeing is a classic farce written by French playwright Marc Camoletti. The English language adaptation, translated by Beverley Cross, was first staged in London at the Apollo Theatre in 1962 and transferred to the Duchess Theatre in 1965, running for a total of seven years. In 1991, the play was listed in the Guinness Book of Records as the most performed French play throughout the world.

Bernard, a successful Parisian architect, juggles three flight attendant fiancées: an American woman (Janet or Gloria), a French woman (Jaqueline; turned into the Italian Gabriella in the most recent Broadway run) and a German woman (Judith or Gretchen). He tracks their airlines’ timetables, and his long-suffering housekeeper, Bertha, reluctantly resets the menus and bedroom decor depending on the arrivals and departures. Bernard has been successful at convincing each woman that she is the only one. Bernard’s old school friend Robert arrives unexpectedly, and Bernard proudly explains to his wide-eyed visitor how he makes his busy romantic schedule run smoothly. He also has a fallback plan for keeping his fiancées separate, involving his country house. Unfortunately for Bernard, a new, faster Boeing jet has been introduced, changing the timetable. Weather delays occur, and complications arise when the women’s behaviour does not match Bernard’s careful planning.