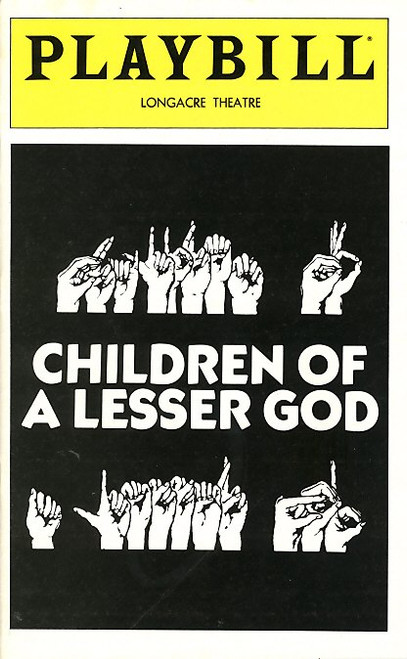 Children of a Lesser God is a play by Mark Medoff, published in 1980 focusing on the conflicted professional and romantic relationship between deaf former student, Sarah Norman, and her teacher, James Leeds. The play was specially written for the Deaf actress Phyllis Frelich, based to some extent on her relationship with her husband Robert Steinberg. It was originally developed from workshops and showcased at New Mexico State University, with Frelich and Steinberg in the lead roles. It was seen by Gordon Davidson, Director of the Mark Taper Forum in Los Angeles, who insisted that the male role needed to be played by a more experienced professional actor. Following a highly-successful run at the Mark Taper Forum in Los Angeles, the Broadway production, directed by Gordon Davidson, opened on March 30, 1980 at the Longacre Theatre, where it ran for 887 performances. The cast included Phyllis Frelich as Sarah and John Rubinstein as James. David Ackroyd later replaced Rubinstein. Deaf actress Elizabeth Quinn later replaced Frelich, and Linda Bove, another Deaf actress, best known to television audiences for her more than 20-year long run on Sesame Street had a successful turn in the role as well. In 1981, the West End production ran originally at the Mermaid Theatre, then at the Albery Theatre, garnering three Olivier Awards. The production starred Trevor Eve and Elizabeth Quinn. Deaf actors from the UK were involved as understudies including Jean St Clair, Sarah Scott and Terry Ruane.

Children of a Lesser God - 2