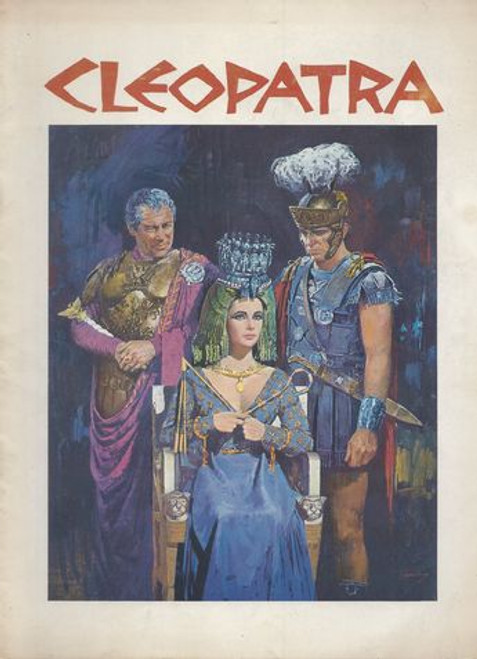 In 48 B.C., Julius Caesar (Sir Rex Harrison) pursues Pompey from Pharsalia to Egypt. Pharaoh Ptolemy XIII (Richard O'Sullivan), now supreme ruler after deposing his older sister, Cleopatra VII (Dame Elizabeth Taylor), attempts to gain favor with Caesar by presenting the conquerer with the head of Pompey, borne by his governors, Pothinus (Grégoire Aslan) and Achillas (John Doucette). To win Caesar's support from her brother, Cleopatra hides herself in a rug, which Apollodorus (Cesare Danova), her servant, presents to Caesar. The Roman is immediately infatuated. Banishing Ptolemy, he declares Cleopatra Egypt's sole ruler and takes her as his mistress. A son, Caesarion (Loris Loddi), is born of their union. Caesar, however, must return to Italy. Although he is briefly reunited with Cleopatra during a magnificent reception for the Queen in Rome, Caesar is assassinated shortly thereafter, and Cleopatra returns to Egypt. When Mark Antony (Richard Burton), Caesar's protégé, beholds Cleopatra aboard her elaborate barge at Tarsus some years later, he is smitten and becomes both her lover and military ally. Their liaison notwithstanding, Antony, to consolidate his position in Rome, marries Octavia (Jean Marsh), sister of the ambitious Octavian (Roddy McDowall). The marriage satisfies no one. Cleopatra is infuriated, and Antony, tiring of his Roman wife, returns to Egypt. There he flaunts his liaison by marrying Cleopatra in a public ceremony. Sensing Antony's weakness, Octavian attacks and defeats his forces at Actium. Alarmed, Cleopatra withdraws her fleet and seeks refuge in her tomb.

Condition: Used Fair (White Cover has some marks) inside perfect