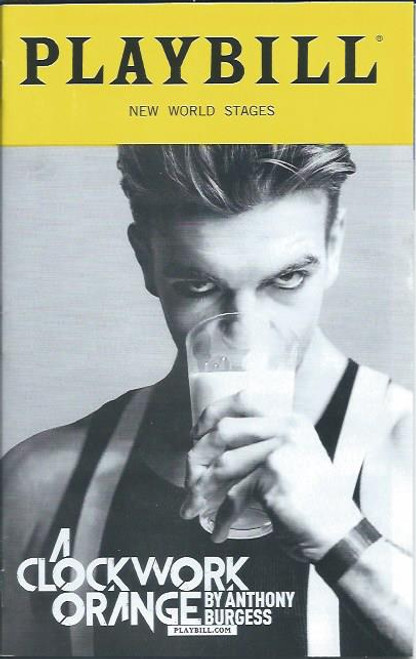 A CLOCKWORK ORANGE lures audiences into a glass-edged, testosterone-filled underworld of a dystopian future. The explosive story of little Alex and his rebellious gang of Droogs is a ground-breaking classic of orgiastic ultra-violence and sexuality. As hauntingly relevant today as when Burgess’ book was published in 1962, and when Stanley Kubrick’s ground-breaking film caused a stir in 1971, A CLOCKWORK ORANGE is an unapologetic celebration of the human condition.

The Guardian wrote that “Alexandra Spencer-Jones touches the dark heart of a piece that is as pertinent today as it was 50 years ago. Maybe even more so…with a charismatic swagger, the production sucks the audience in with an indie-pop soundtrack and a physical performance style that has an edgy contemporary punch.”
Widely considered a cultural landmark since its release in 1962, A Clockwork Orange has been declared one of the "100 Greatest Novels of All Time" by both Time Magazine and The Guardian, the latter deeming it "a stunningly original novel that opened many literary doors for the work of subsequent British writers...a volume bursting with linguistic energy that continues to startle and inspire generations of new readers."  Kubrick’s film, released in 1971, was an immediate hit with American audiences and critics, grossed over ten times its budget, and was nominated for an Academy Award for Best Picture.

Direct from a sold-out, award-winning London run, director Alexandra Spencer-Jones’s electrifying, critically-acclaimed stage production of A CLOCKWORK ORANGE, based on Anthony Burgess’ 1962 literary masterpiece, will have its New York Premiere this fall in a limited Off-Broadway engagement at New World Stages (340 West 50th Street). Jonno Davies, who led the London cast, will make his New York Stage debut in the lead role of Alex.

How to Succeed in Bussiness without Really Trying - 3