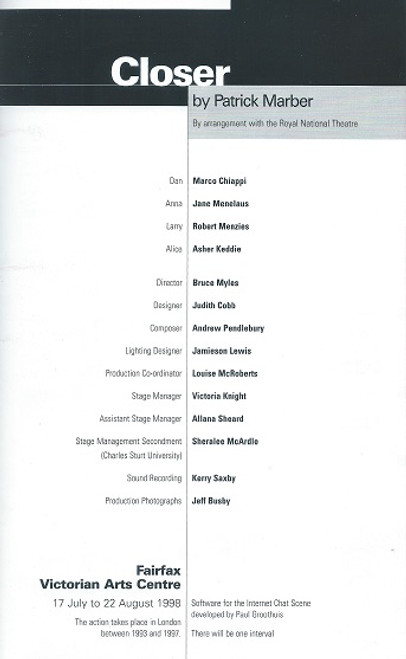 Closer is the second play by British playwright Patrick Marber. The play premiered at the Royal National Theatre's Cottesloe Theatre in London in 1997 and made its North American debut at the Music Box Theatre on Broadway on 25 January 1999. It was adapted by Marber for the 2004 film of the same name, produced and directed by Mike Nichols.

Closer is formed in the style of a drama, characteristically blending elements of classical tragedy, classical comedy, and melodrama. The characters very much resemble the viewing subjects and the conflicts occur between people, in the style of a melodrama. On the other hand, the way the plot progresses is comedic—several romances are pursued. Dan plays a massive comedic trick on Larry, which results in another romance emerging. There are moments of cognito, where Alice realises that she does not love Dan any more and Dan realises he loves Alice—and the final moment of revelation occurs when Alice's true identity is unveiled. But these elements blend with melodramatic plot twists—the four characters switch partners frequently, and their emotional statuses constantly fluctuate between high and low, in a series of reversals that build toward increasing tension.