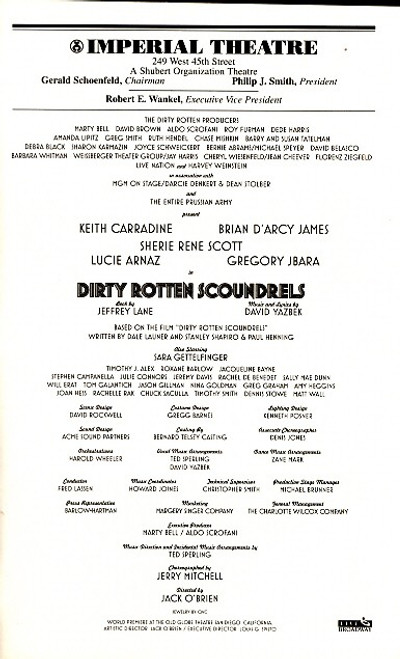 Dirty Rotten Scoundrels is a Broadway musical, with music and lyrics by David Yazbek and a book by Jeffrey Lane; it is based on the film of the same name. The musical ran on Broadway in 2005 and also had a US tour. The musical premiered in San Diego, California on September 22, 2004, before moving to Broadway in January 2005 and officially opening in March at the Imperial Theatre. The show closed on Broadway on September 3, 2006 with a total of 626 performances. The director was Jack O’Brien, choreographer was Jerry Mitchell, scenic design by David Rockwell, costume design by Gregg carves, and lighting design was by Kenneth Posner. A North American national Equity tour launched on August 4, 2006 with Norbert Leo Butz reprising his role as Freddy, alongside Tom Hewitt as Lawrence. The Equity tour ended on August 19, 2007. The 25-city non-Equity tour of the show, with Jamie Jackson as Lawrence and Doug Thompson as Freddy, debuted September 25, 2007 in Dayton, Ohio, with its final performance on March 23, 2008, in Memphis, Tennessee. International productions have opened in Tokyo, Mexico City, Madrid, Stuttgart, Seoul, Oslo, Stockholm, Tampere and productions are planned for Copenhagen, Reykjavik, and London.