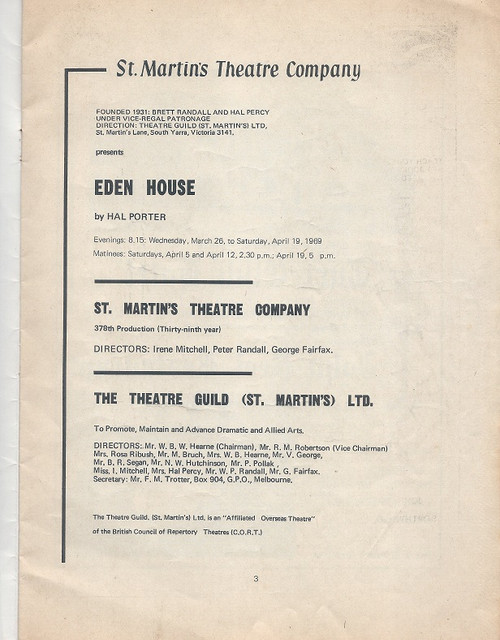 Eden House is a 1969 play by Australian author Hal Porter.
It was adapted for TV in 1970.
The played toured the UK in the 1970s with Jean Kent, and Dermot Walsh in leading roles. It was retitled 'Home on the Pigs back.

Harold Edward  Porter (16 February 1911 – 29 September 1984) was an Australian novelist, playwright, poet and short-story writer.
Porter was born in Albert Park, Victoria,[1] grew up in Bairnsdale, Victoria and worked as a journalist, teacher and librarian. A car accident just before the outbreak of war prevented him from serving in World War II. His first stories were published in 1942 and by the 1960s he was writing full-time. His 1963 memoir, The Watcher on the Cast Iron Balcony, is regarded as an Australian masterpiece.
His other works were less successful. The literary critic Laurie Clancy said: "Porter's novels are, with one exception, less successful than his stories, not least because his scorn for most of his characters becomes wearying over the length of a novel." The exception, Clancy thought, was The Tilted Cross, a historical novel set in Hobart in the 1840s.
After Porter's death, his friend and biographer Mary Lord revealed in her book Hal Porter: Man of Many Parts that Porter had had sexual relations with Lord's then ten-year-old son; despite this, she chose to remain friends with him.

Size 275 x 205 mm  Pictures and information of the cast and show.
Condition: Used Good 8/10 (Not to bad)
(Please Note scans are low res for fast loading)