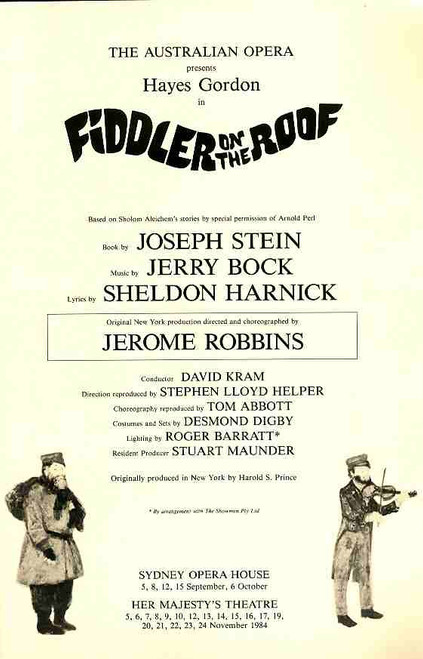 Fiddler on the Roof (Musical)

The original Broadway production of the show, which opened in 1964, was the first run of a musical in history to surpass the 3,000 performance mark. Fiddler held the record for the longest-running Broadway musical for almost 10 years until Grease surpassed its run. It remains Broadway’s fourteenth longest-running show in history. The production was extraordinarily profitable and highly acclaimed. It was nominated for ten Tony Awards, winning nine, including Best Musical, score, book, direction and choreography. It spawned four Broadway revivals, a successful 1971 film adaptation, and the show has enjoyed enduring international popularity. It is also a very popular choice for school and community productions. Fiddler on the Roof on tour in 1969 in Australia with Hayes Gordon, Brigid Lenihan, Max Bruch.

This 1984 Revival was the Original New York Production Directed and Choreographed by Jerome Robbins. Fiddler also performed in the Sydney Opera House and Her Majesty's Theatre Sydney.

Size: 305 x 205 mm 52 Pages +
Many wonderful photographs from the show in full colour, a great addition to any show collection.
(Please Note scans are low res for fast loading)