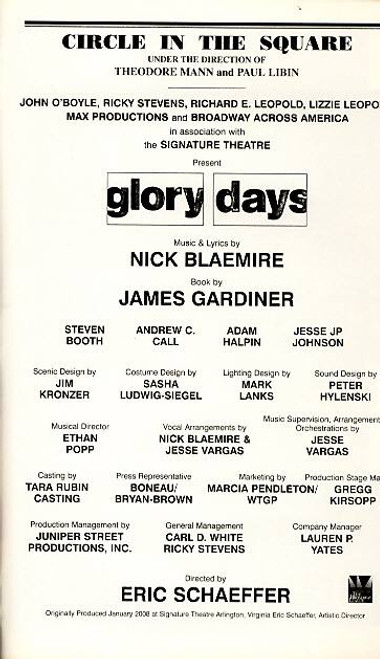 Glory Days is a musical with music and lyrics by Nick Blaemire and a book by James Gardiner about four high school friends reuniting a year after graduation. Glory Days began previews on Broadway at the Circle in the Square Theatre on April 22, 2008, with an official opening on May 6, 2008. Schaeffer again directed, and the Broadway production featured the same actors who starred in the Signature Theatre production. The Broadway engagement was produced by John O’Boyle, Ricky Stevens, Richard E. Leopold and Lizzie Leopold, and Max Productions in association with Signature Theatre. The production featured sets by James Kronzer, costumes by Sasha Ludwig-Siegel and lighting by Mark Lanks.