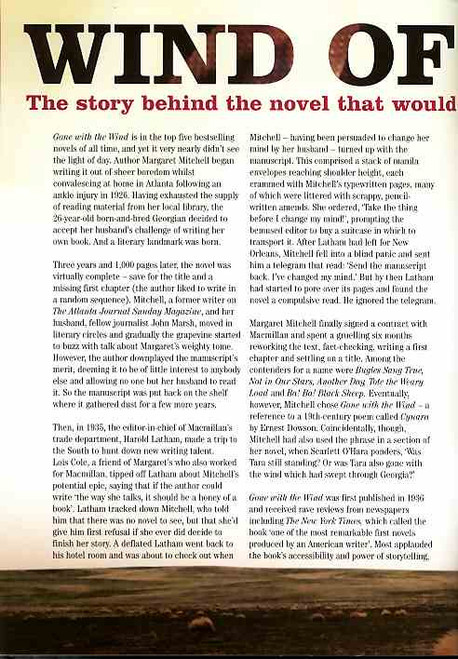 Gone with the Wind (Musical)

Gone with the Wind is a musical based on the Margaret Mitchell's novel of the same name and its 1939 film adaptation, with music and lyrics by Margaret Martin, and a book by Martin, adapted by Sir Trevor Nunn.It began previews on 5 April 2008 and officially opened at the New London Theatre in London's West End on 22 April 2008.  The production was directed by Sir Trevor Nunn and featured sets by John Napier and costumes by Andreane Neofitu. Darius Danesh and Jill Paice starred as Rhett Butler and Scarlett O'Hara respectively.  The show was produced by Aldo Scrofani, Colin Ingram, Gary McAvay and the Nederlander Producing Company. The production closed on June 14, 2008, after 79 performances.

This Souvenir UK Program is from the 2008 London Production Book &amp; Lyrics by Margaret Martin.

Size 170 x 240 cm 48 Pages, Great Information on the show and cast also includes colour pictures from the rehearses a must for any collector.

(Now This is Rare only 79 performances)