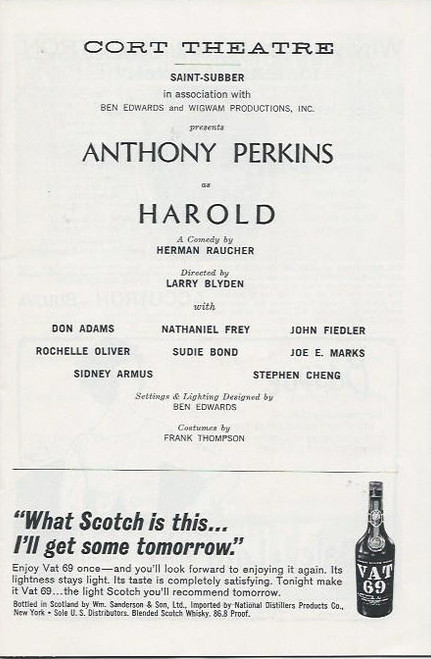 A twentysomething young man falls in love for the first time in Herman Raucher’s play.

Anthony Perkins (April 4, 1932 – September 12, 1992) was an American actor. He was nominated for a Best Supporting Actor Oscar for his second film, Friendly Persuasion, but is best known for playing Norman Bates in Psycho. His other films include The Trial, Fear Strikes Out, Tall Story, The Matchmaker, Pretty Poison, North Sea Hijack, and The Black Hole.

Herman Raucher (born April 13, 1928 in Brooklyn, New York) is an American author who has written several screenplays,among them the popular Summer of ’42 and The Great Santini and several novels and plays. He was married to Broadway dancer Mary Kathryn Raucher from 1960 until her death in 2002; they had two daughters. Raucher was  commissioned to write the novelization and screenplay for Ode to Billie Joe based on the song by Bobbie Gentry. He met with Gentry to learn the reason for the protagonist’s suicide, which is not revealed in the song. Gentry replied that she had never come up with a reason.