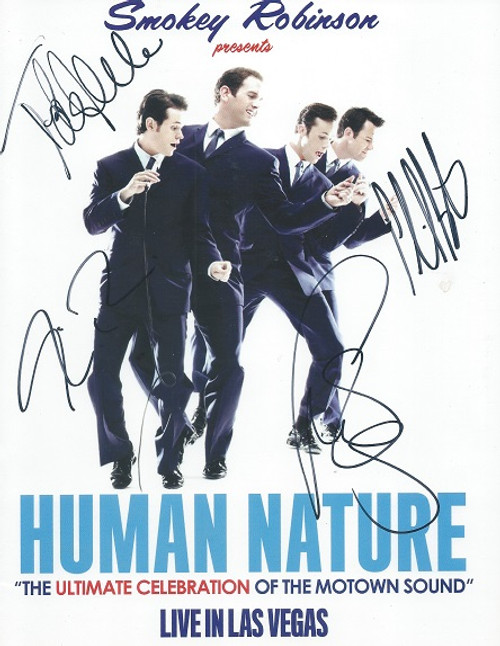 Signed by all the boys

Human Nature is an Australian pop vocal group. They formed in 1989, originally as a doo-wop group called The Four Trax, while the members were schoolmates in Sydney. After signing with Sony Music and renaming themselves Human Nature, they released their debut album Telling Everybody in 1996, and have charted 17 hits in Australia's Top 40, and five hits in Australia's Top 10. Three of their albums have reached multi-platinum certification in Australia, and four have reached platinum, with sales of over 1.6 million records in Australia. After transitioning from a boy band to a Motown tribute group, they have been performing on the Las Vegas Strip. In May 2010, Human Nature announced that the Imperial Palace had extended their engagement two years, and had also renamed their venue the "Human Nature Theatre". Las Vegas mayor Oscar Goodman also decreed that 11 May 2010 to be known as "Human Nature Day.  Group Andrew Tierney, Phil Burton, Michael Tierney, Toby Allen As of July 2012, Human Nature have continued to perform five nights a week now at the Venetian Casino and Hotel in Las Vegas.