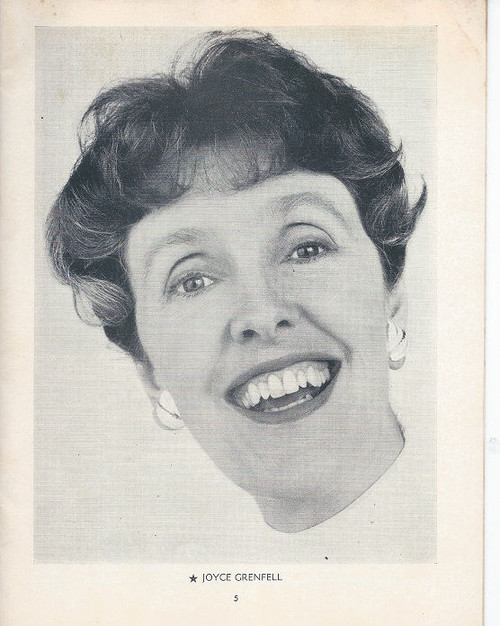 Joyce Irene Grenfell, OBE (née Phipps; 10 February 1910 – 30 November 1979) was an English comedian, singer, actress, monologist, scriptwriter and producer. She is remembered especially for performances in such roles as the gym mistress Miss Gossage in The Happiest Days of Your Life and Ruby Gates in the St Trinian's films.:jacket At that time, it was still unusual for a woman of her high social class to be professionally engaged in show business. During the Second World War, Grenfell toured North Africa, Southern Italy, the Middle East and India with her pianist Viola Tunnard, performing for British troops. In 1989, her wartime journals were published under the title The Time of My Life: Entertaining the Troops. Her singing and comedic talents on stage led to offers to appear in film comedies. Although she performed in a number of films, she continued with her musical recording career, producing a number of humorous albums as well as books.

This Souvenir Program is from the 1969 Australian Tour Production