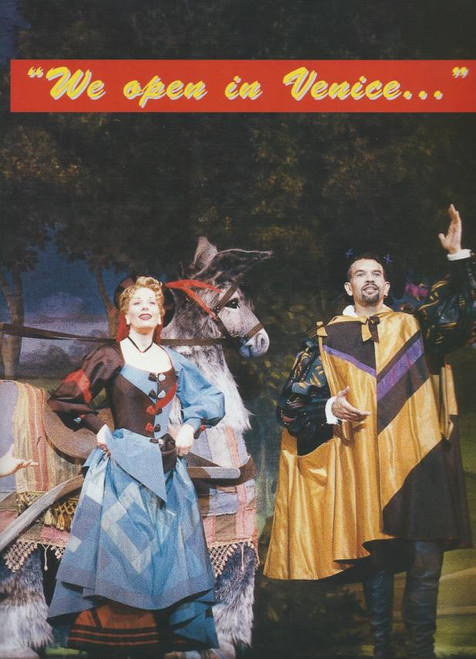 Kiss Me, Kate  is a musical with music and lyrics by Cole Porter. It is structured as a play within a play, where the interior play is a musical version of William Shakespeare’s The Taming of the Shrew. The original production starred Alfred Drake, Patricia Morison, Lisa Kirk and Harold Lang.

Kiss Me, Kate was a comeback and a personal triumph for Cole Porter. After several successful musicals in the 1920′s and 1930s, notably Gay Divorce, Fifty Million Frenchmen, and Anything Goes, he experienced an equestrian accident in 1937 that left him in constant pain.

Following the accident, he continued to write songs and musicals but with limited success, such as Mexican Hayride, Let’s Face It! and Something for the Boys, and some thought he was past his prime. Kiss Me, Kate was a response to Rodgers and Hammerstein’s Oklahoma! and other integrated musicals, and it proved to be his biggest hit and the only one of his shows to run for more than 1,000 performances on Broadway. It won the first Tony Award presented for Best Musical, in 1949.

Kiss of the Spider Woman - 4