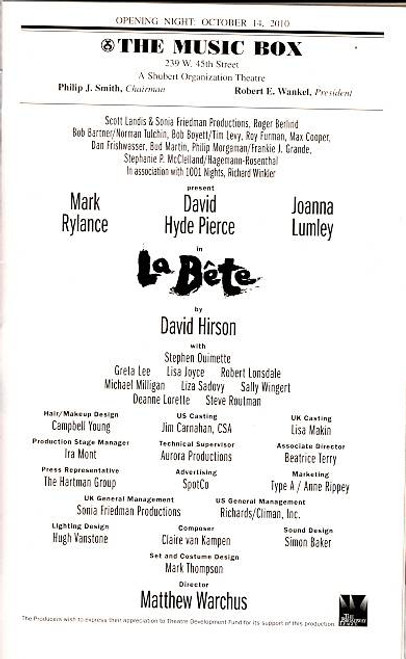 La Bête (1991) is a comedy by American playwright, David Hirson. Written in iambic pentameter, the Molière-inspired story, set in 17th century France, pits dignified, stuffy Elomire, the head of the royal court-sponsored theatre troupe, against the foppish, frivolous street entertainer Valere, whom the troupe's patron, Prince Conti, wishes them to bring aboard. Despite Elomire's violent objections, the company is forced to perform one of Valere's own plays, which results in dramatic changes to the future of Elomire, Valere, and the company itself. Following 15 previews, the Broadway production, produced by Stuart Ostrow and Andrew Lloyd Webber and directed by Richard Jones, opened on February 10, 1991 at the Eugene O'Neill Theatre, where it ran for only 25 performances.