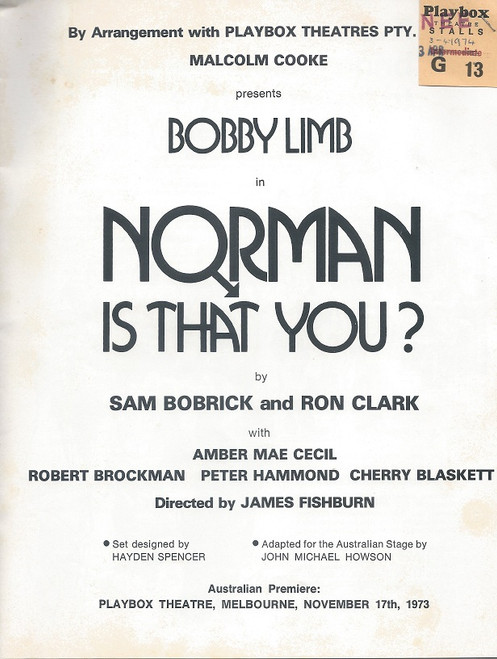 Norman, Is That You? by Sam Bobrick and Ron Clark

Norman, Is That You? is a 1970 play in two acts by American playwrights Ron Clark and Sam Bobrick about a Jewish couple coming to terms with their son's homosexuality. The work is notably the first play written by both writers. After 19 preview performances, the play officially opened on Broadway on February 19, 1970 at the Lyceum Theatre. It closed after only 12 more performances on February 28, 1970. The production was directed by George Abbott and starred Martin Huston as Norman Chambers, Walter Willison as Garson Hobart, Lou Jacobi as Ben Chambers, Dorothy Emmerson as Mary, and Maureen Stapleton as Beatrice Chambers.
Norman, Is That You? is notably the first play to have an entirely open and comedic treatment of the topic of homosexuality. In his review of the play, Clive Barnes of The New York Times wrote,
"It is strange how tastes and standards change. It seems only yesterday that we had plays such as The Green Bay Tree or even Tea and Sympathy which handled the then vexed subject of homosexuality with silk gloves... Here for the first time was a homosexual play aimed at the theater-party set. It is called Norman, Is That You? and it seems that it is him.

This Souvenir Program is from the 1974 Australian Production