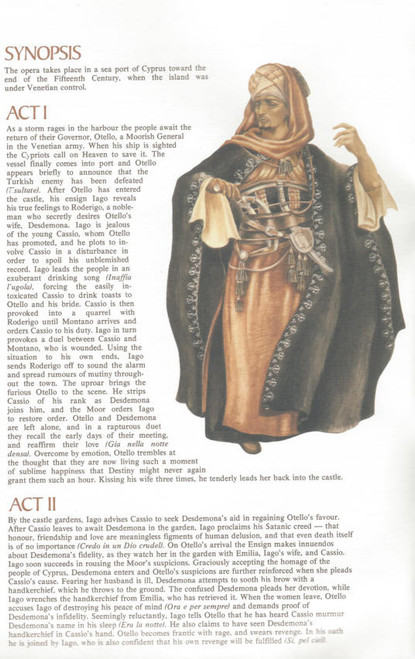 Otello is an opera in four acts by Giuseppe Verdi to an Italian libretto by Arrigo Boito, based on Shakespeare's play Othello. It was Verdi's penultimate opera, and was first performed at the Teatro alla Scala, Milan, on 5 February 1887.

With the composer's reluctance to write anything new after the success of Aida in 1871 and his retreat into retirement, it took his Milan publisher Giulio Ricordi the next ten years, first to persuade him to write anything, then to encourage the revision of Verdi's 1857 Simon Boccanegra by introducing Boito as librettist, and finally to begin the arduous process of persuading and cajoling Verdi to see Boito's completed libretto for Otello in July/August 1881. By that time no music had yet been written, and the composer did not guarantee that any would be written.

Size 210 x 300 mm Lots of Information on the show and the Cast, and Story
Condition: Used Good 8/10 Looks Good (Some small marks on the cover)