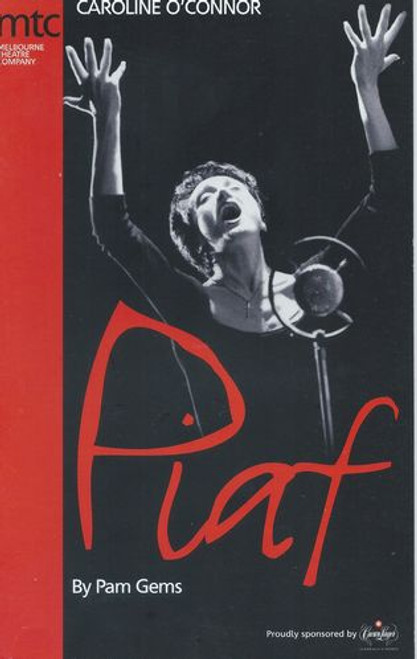 Piaf is a play by Pam Gems that focuses on the life and career of French chanteuse Edith Piaf. The biographical drama with music portrays the singer in a most unflattering light. She is presented as a self-destructive, promiscuous alcoholic and junkie who, in one controversial scene, urinates in public. It premiered in 1978 at The Other Place in Stratford-upon-Avon, after which it moved to The Warehouse and the Aldwych Theatre, London. The production starred Jane Lapotaire in the title role, and included Ian Charleson as Pierre. In Argentina occurred in 1983/86 with Virginia Lago in the role of La Piaf. Awards: In 1984 Premio Estrella de Mar for Best Actress and in 1984 Prensario Award for Best Actress. A London revival occurred in 1993/94 with Elaine Paige in the role of Piaf. In 1994, Gold Badge of Merit Award BASCA. In 1994, This gained her a nomination for the Olivier Award - Best Actress in a Musical. After six previews opened on Broadway at the Plymouth Theatre on February 6, 1981 with its original star, Jane Lapotaire. It ran for 165 performances.