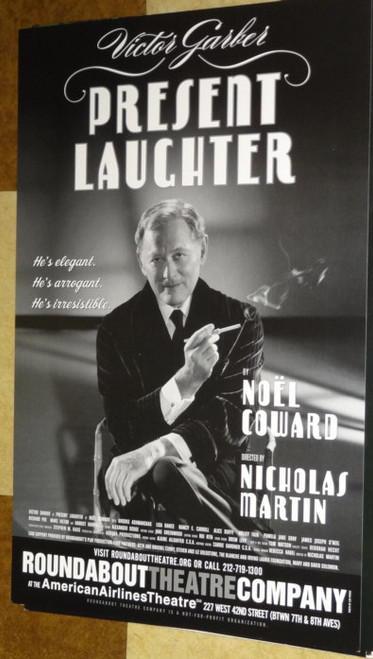 Present Laughter is a comic play written by Noël Coward in 1939 and first staged in 1942 on tour, alternating with his lower middle-class domestic drama This Happy Breed. Later Coward’s new play Blithe Spirit was added to the repertory for the tour. The play’s title comes from a song in Shakespeare’s Twelfth Night, which urges carpe diem (“present mirth hath present laughter”), and so the word present in the title should be pronounced as the adjective /prezənt/, not the verb /prezent/.

The plot follows a few days in the life of the successful and self-obsessed light comedy actor Garry Essendine as he prepares to travel for a touring commitment in Africa. Amid a series of events bordering on farce, Garry has to deal with women who want to seduce him, placate both his long-suffering secretary and his estranged wife, cope with a crazed young playwright, and overcome his fear of middle-age (he has recently turned forty) and, by implication, his impending mid-life crisis. The story was described by Coward as “a series of semi-autobiographical pyrotechnics”.

Coward starred as Garry Essendine in Present Laughter during the original run. Later productions have featured actors such as Albert Finney, Peter O’Toole, Simon Callow and Ian McKellen in the lead role. The play has enjoyed numerous revivals in Europe and North America – including a U.S. tour in 1958 with Coward reprising the Essendine role.