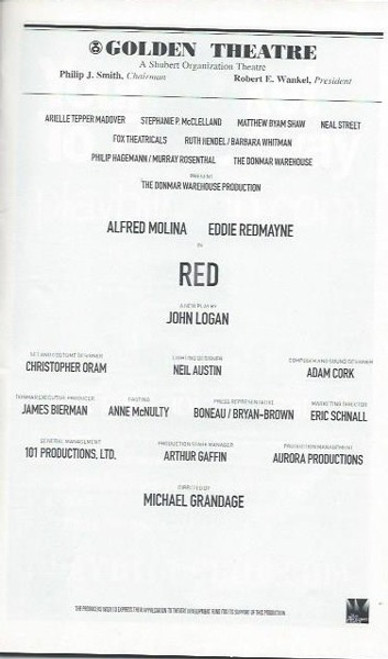 Red  is a play by American writer John Logan about artist Mark Rothko first produced by the Donmar Warehouse, London in December 2009. The original production was directed by Michael Grandage and performed by Alfred Molina as Rothko and Eddie Redmayne as his assistant Ken.

The production, with its two leads, transferred to Broadway at the John Golden Theater for a limited engagement which began on March 11, 2010 and is expected to close on June 27.It was the 2010 Tony Award winner for Best Play. Additionally, Redmayne won a 2010 Tony Award for Best Performance by a Featured Actor in a Play.

Mark Rothko is in his New York studio in 1958-9, painting a group of murals for the expensive and exclusive Four Seasons restaurant. He gives orders to his assistant, Ken, as he mixes the paints, makes the frames, and paints the canvases. Ken, however, brashly questions Rothko's theories of art and his acceding to work on such a commercial project.