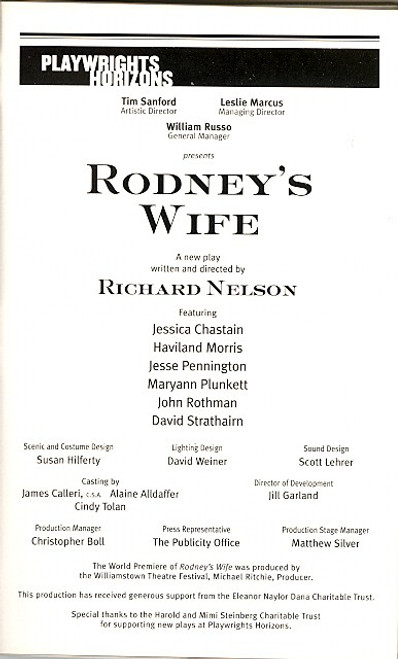 A full emotional geography of a family . . . Seemingly light conversation scrapes the skins of the characters in this sharply etched study of dislocation, loneliness and sexual betrayal. -Ben Brantley, The New York Times Nelson is a master of the quiet detail, of the oblique rhythm that transforms emotional diffidence into fascinating character. -Linda Winer, Newsday The early scenes proceed with the closely observed simplicity of Chekhov, whereas the later more wrenching moments evoke the eloquent bitterness of Albee. -David Cote, TimeOut New York A new work by leading American playwright Richard Nelson, who for more than 25 years has written prolifically, and with fine detail, on the perplexities of everyday living. In Rodney's Wife, a fading American actor in Rome for the filming of a 1960s spaghetti Western gathers with family and friends at a rented villa. Over the course of one booze-soaked summer night, jealousies and secrets are revealed that crumble the foundations of their relationships. Inspired by Euripides, the play is a tragedy of exiles who continue to need each other, even as they push away. Richard Nelson won Britain's Olivier Award for Best Play for Goodnight Children Everywhere, and the Tony Award for Best Book for his musical James Joyce's The Dead, His plays have been widely produced in the U.S. and Great Britain. He is an Honorary Associate Artist of the Royal Shakespeare Company, and Chair of the Playwriting Department at the Yale School of Drama (Nov 2004) Cast - Jessica Chastain, Haviland Morris, Jesse Pennington, Maryann Plunkett, John Rothman, David Strathairn.