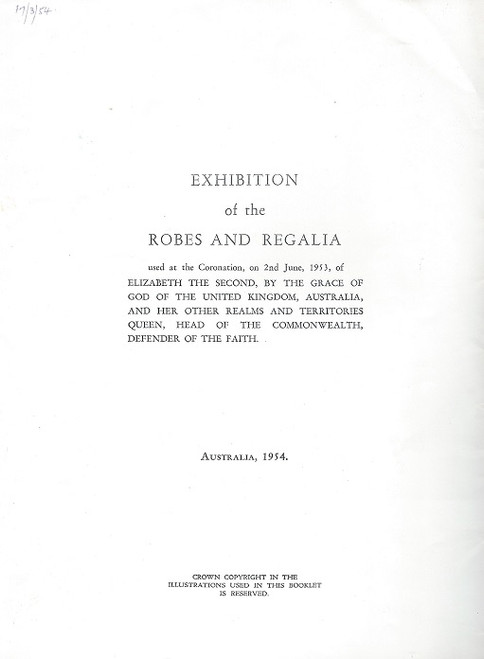 Exhibition of the Royal Robes and Regalia

Exhibition of the Royal Robes and Regalia tour of Australia 1954, the government of the Commonwealth brings the exhibition to the Australian people, the coronation of Her Majesty Queen Elizabeth II on 2 June 1953was probably the greatest in the history of Mankind.

The coronation of Elizabeth II took place on 2 June 1953 at Westminster Abbey, London. Elizabeth II ascended the throne at the age of 25 upon the death of her father, George VI, on 6 February 1952, being proclaimed queen by her privy and executive councils shortly afterwards. The coronation was held more than one year later because of the tradition of allowing an appropriate length of time to pass after a monarch dies before holding such festivals. It also gave the planning committees adequate time to make preparations for the ceremony. During the service, Elizabeth took an oath, was anointed with holy oil, invested with robes and regalia, and crowned Queen of the United Kingdom, Canada, Australia, New Zealand, South Africa, Pakistan, and Ceylon.

This Souvenir Program is from the 1954 Australian Tour

Size 240 x 180 mm  many Beautiful photos from the collection, something very special