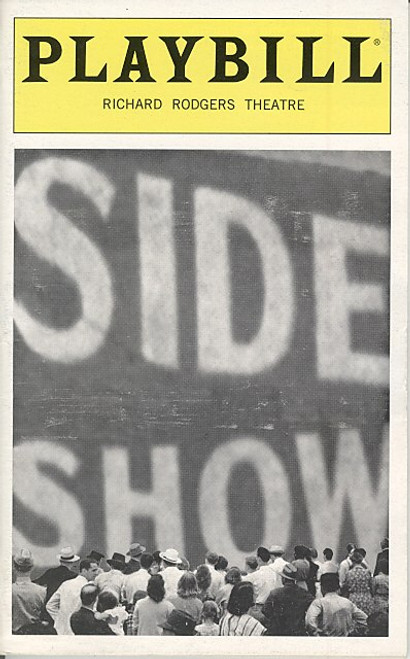 Side Show is a musical about Daisy and Violet Hilton, conjoined twins who make a change from being a circus act to becoming famous stage performers in the 1930s. The show was written by Bill Russell (book and lyrics) and Henry Krieger (music). The show starred Alice Ripley as Violet and Emily Skinner as Daisy. It opened on Broadway on October 16, 1997, and ran for 91 performances at the Richard Rodgers Theatre. Despite receiving some positive reviews, the show closed on January 4, 1998. It was later nominated for four Tony Awards in 1998. Although Side Show won none of these awards, it was the first and only time that two actresses were co-nominated for Best Actress in a Musical as a team (if they had won, they would have won together). At the Tony Awards ceremony, the two stars performed the show's most popular number, "I Will Never Leave You". The other show-stopping number was "Who Will Love Me As I Am?", the closing number of Act 1. Audiences loved the harmonious blend of Alice Ripley and Emily Skinner's voices so much that the two actresses successfully released two albums of duets (Duets and Unsuspecting Hearts). Other members of the cast who have gone on to successful endeavors on Broadway include Jeff McCarthy (Urinetown), Hugh Panaro (The Phantom of Opera, Lestat), Norm Lewis (The Wild Party, Dessa Rose, Les Misérables, The Little Mermaid) and J. Robert Spencer (Jersey Boys, Next to Normal).