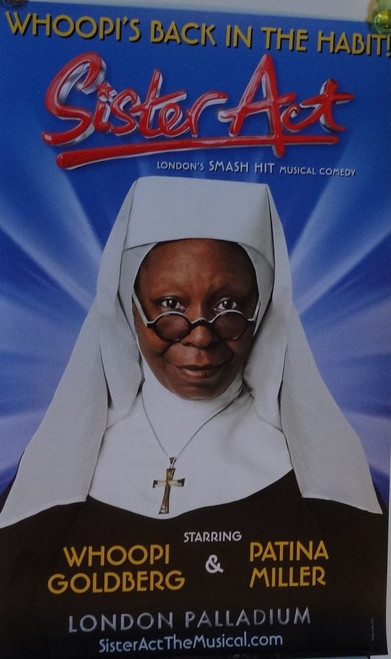 Sister Act opened in the West End at the London Palladium on June 2, 2009, following previews from May 7. The production was directed by Peter Schneider and choreographed by Anthony Van Laast, with set design by Klara Zieglerova, costumes by Lez Brotherston and lighting by Natasha Katz. Following a year-long search, 24-year-old actress Patina Miller was cast as Deloris, alongside Sheila Hancock as the Mother Superior, Ian Lavender as Monsignor Howard, Chris Jarman as Shank, Ako Mitchell as Eddie, Katie Rowley Jones as Sister Mary Robert, Claire Greenway as Sister Mary Patrick and Julia Sutton (later replaced by Jacqueline Clarke) as Sister Mary Lazarus. It was announced on April 29, 2010 that pop singer Simon Webbe of Blue fame would join the cast as Shank on May 31, 2010 and that the production would close on January 1, 2011.

It was then announced the show would close on October 30, 2010 to make way for Andrew Lloyd Webber's new musical production of The Wizard of Oz. Chris Jarman took a planned break from the show from May, during which time Webbe played the role of Shank, and Sheila Hancock left on July 31 due to other contractual commitments. All cast members (with the exception of Simon Webbe, who left on August 28) stayed in the show until it closed. Whoopi Goldberg joined the cast as the Mother Superior for a limited engagement that was supposed to last from August 10–31, 2010, but she left the cast on August 27 due to her mother suffering a stroke. Goldberg was then succeeded by Sally Dexter. However, Goldberg returned to the cast for five performances on October 22, 23 and 25. The show closed as announced on October 30, 2010.