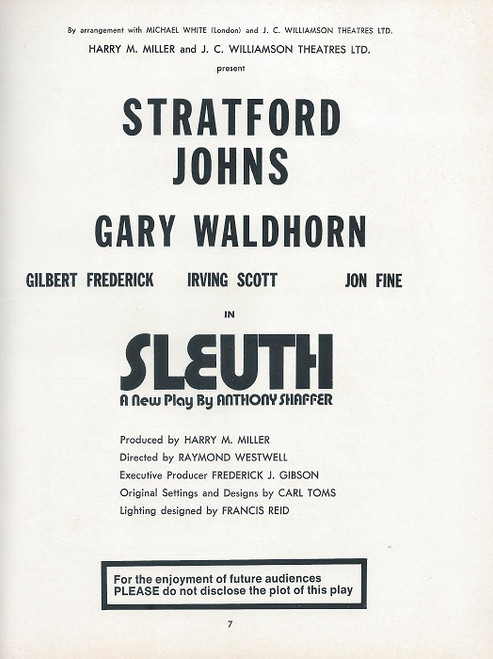 Sleuth is a 1970 play written by Anthony Shaffer. The Broadway production received the Tony Award for Best Play, and Anthony Quayle and Keith Baxter received the Drama Desk Award for Outstanding Performance. The play was adapted for feature films in 1972, 2007 and 2014. Directed by Clifford Williams, Sleuth opened November 12, 1970, at the Music Box Theatre, where it ran for 1,222 performances. Anthony Quayle and Keith Baxter starred as Andrew Wyke and Milo Tindle. When Quayle left the production in 1972, he was succeeded by Paul Rogers, George Rose and Patrick Macnee. Baxter was succeeded by Brian Murray, Donal Donnelly, Jordan Christopher and Curt Dawson.

The play is set in the Wiltshire manor house of Andrew Wyke, an immensely successful mystery writer. Wyke's home reflects his obsession with the inventions and deceptions of fiction and his fascination with games and game-playing. He lures his wife's lover Milo Tindle to the house and convinces him to stage a robbery of her jewelry, a proposal that sets off a chain of events that leaves the audience trying to decipher where Wyke's imagination ends and reality begins. Shaffer said the play was partially inspired by one of his friends, composer Stephen Sondheim, whose intense interest in game-playing is mirrored by the character of Wyke.

Size 185 x 245 mm Great information about the show and John Gielgud a great addition to any show collection.