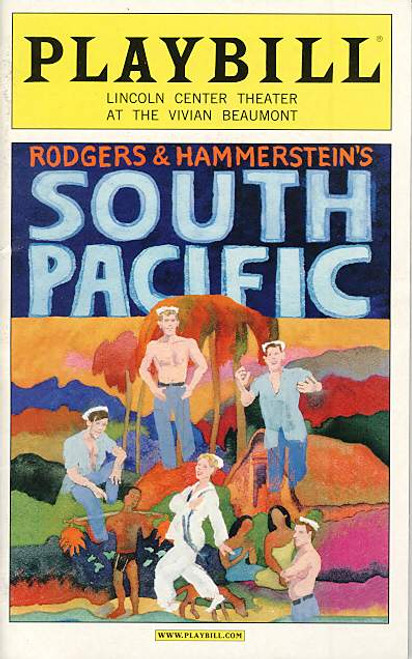 South Pacific  is a 1949 musical with music by Richard Rodgers, lyrics by Oscar Hammerstein II and book by Hammerstein and Joshua Logan. The story draws from James A. Michener's Pulitzer Prize-winning 1947 book Tales of the South Pacific, weaving together characters and elements from several of its stories into a single plotline. The musical won the Pulitzer Prize for Drama in 1950. The issue of racial prejudice was sensitively and candidly explored at a time when few musicals engaged in serious social commentary. Colour Playbill South Pacific is considered by some to be one of the greatest Broadway musicals. Several of its songs, including "Bali Ha'i", "I'm Gonna Wash That Man Right Outta My Hair", "Some Enchanted Evening", "Happy Talk", "Younger than Springtime", and "I'm in Love with a Wonderful Guy", have become worldwide standards. Cast - Matthew Morrison, Kelli O'Hara, Paulo Szot, Danny Burstein, LOretta Ables Sayre, Sean Culklen, Victor Hawks, Skipp Sudduth, Noah Weisberg