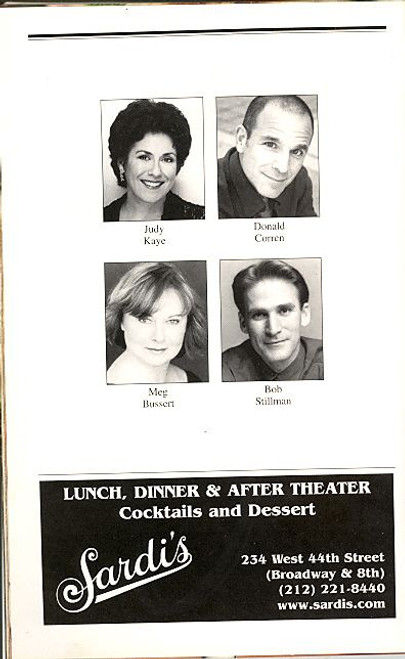 Souvenir is a two-character play, with incidental music, by Stephen Temperley. Set in a Greenwich Village supper club in 1964, it flashes back to the musical career of Florence Foster Jenkins, a wealthy socialite with a famously uncertain sense of pitch and key. In 1932, she met mediocre pianist Cosmé McMoon, and the two teamed up in the hope of achieving success. Over the next dozen years, their bizarre partnership yielded hilariously off-key recitals that became the talk of New York, earned them cultish fame, and culminated in a sold-out performance at Carnegie Hall in 1944. The play was showcased by the off-Broadway York Theatre Company in 2004. After fourteen previews, the Broadway production, directed by Vivian Matalon (who originally suggested the subject matter to Temperley), opened on November 10, 2005 at the Lyceum Theatre, where it ran for 68 performances. Judy Kaye and Donald Corren comprised the cast. Kaye was nominated for both the Tony and Drama Desk Award for her performance. The Lyric Stage Company of Boston staged Souvenir in early 2007 - their production featured direction by Spiro Veloudous

Starring: Leigh Barret as Jenkins, with Will McGarrahan as Cosme.